A New Type of Volunteer 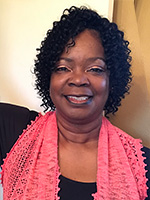 Hailing from a large of family of 22 in Louisiana, Carrie Duren has a unique view point of life. For Carrie and her family, the world was no bigger than the small town of Monroe.

As Carrie worked alongside her Mother in the kitchen, she learned how to make a lot from the little they had and how to serve others with joy and love. When Carrie became an adult, she sought ways to be used for His kingdom, floating between different positions in church. At one point, Carrie became a foster parent for numerous children. Even with her service in the church and the foster children, she felt something missing.

Carrie prayed to the Lord for something she could do for Him. She had been doing worship dance for only a month when All Nations International held “A Call to Worship” seminar. A convergence of churches from the Antelope Valley taught praise, worship and worshipping the Holy God.

During the first night of the conference, God spoke to Carrie, that night she knew deep inside, that her call was to dance for Him. “That was my breakthrough. Dancing was second nature to me, I had never taken classes for it. I haven’t stopped since.”

After participating in the initial performance of the play “Casaq the Eagle”, the Lord opened a whole new world for Carrie. She stepped into her place in His Kingdom as His ambassador, equipped with the impartation of Isaiah 58, armed with her gifts, talents and His Spirit.

Carrie’s call has taken her to Native American Reservations, Mexico, the Philippines and Uganda, East Africa.

Growing up, Carrie became aware of the world around her and had a burden to go to Africa. The day she stood on Ugandan soil, she marveled at the similarities and how much people did things the same way as when she was a child in Louisiana. She felt much she felt like home, God had called her and prepared her.

God has a call on your life to do something bigger than yourself.

So…how do you demonstrate Isaiah 58?