You know by now: another Monday, another post! We have a new message up on our Transcribed Teaching page. The weekly message is entitled “King of Glory, Mighty for Battle“, and wow, is it a powerful one (one that many of you will remember her speaking on often)! Agnes speaks of the battle that is the Lord’s, and how we should “put on the Lord Jesus Christ”, for it is He who bears the armor for us!

“We want to fight the battle ourselves, yet God is saying stand still and know the will of the Lord. Sing praises unto Him with the high praises of God in our mouths and the two edged sword in our hand, He gave this honor to all of the saints.  I’m not talking about doctrines of men, I am talking about the pure word of God that works and does not fail.  If we put our trust in Him, He’s going to prove it to us by doing exactly what He says, in His word, that He will do.  The battle is the Lords, not ours.  We have to let Him change our lives so that we can take instructions from Him.

What am I giving you this morning?  The word of God, the sharp two edged sword!

~ Rev. Agnes I. Numer, “King of Glory, Mighty for Battle”

She continues on, saying how the enemy has been charged to attack us, to cause division and therefore no unity amongst His people. This message is truly a mighty one, and one worth reading over more than once.

We’ve been preparing for several upcoming events, both in the remainder of this month as well next month.
In this month, Saturday the 22nd, Teresa Skinner has will be ministering as well as speaking at “I Need You to Survive”, a Women’s Brunch at Hope Chapel, Lancaster, Ca. Tickets are $10 and can be purchased through Teresa Skinner. Send us an email at ezwheel@as.net with your name and number, or click here to view the event page on Facebook and get other information, such as address and contact information.

Another event we’ve been preparing for is Jordan “Bernie” Skinner and Michelle Garcia’s wedding, in October! The whole family has come together to help Michelle and Jordan get the preparations together. We are so thrilled at the union of these two beautiful people!

Also in October, Casaq will be flying to his farthest performance yet – Ft. Mohave, Arizona!!!

As we’ve mentioned in previous posts, His Spirit has been stirring on many of the Native Reservations, causing a radical shift among the youth. On October 27th, 2012, will be the First Nations Youth Revival. The Revival will have not only Native Youth, but youth from all nations! The event will be held in an 8,000 ministries that will be at the event, speaking into the lives of the children. It’s an exciting time for each of the cast members, as many of them have never done an outreach quite like this! 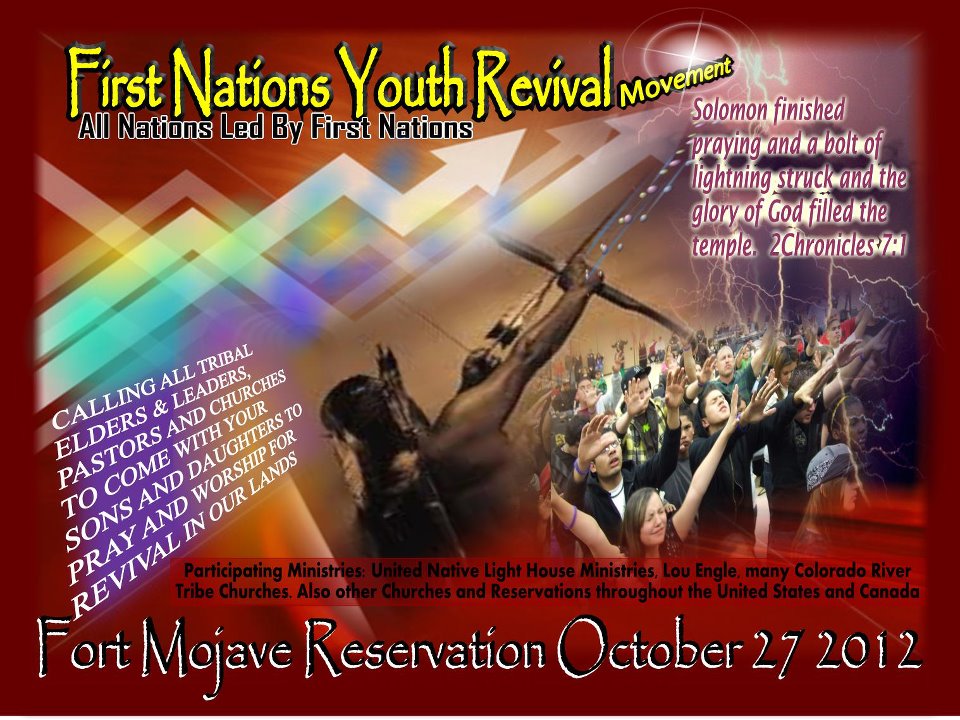 This last Saturday, we had the privilege of hearing one of our All Nations International board members, John Bell, speak at his church as he gave his testimony.  John Bell is the President of AV Heritage Builders, a steel, building and contracting company here in the Antelope Valley. He spoke of All Nations, saying

“All Nations has really been a pillar for me”

He told of his move from Wyoming to the Antelope Valley, and his struggles with personal issues and his marriage, and the aftermath of his shattered dreams. After a finding a job, a coworker who was saved, told John about Jesus, and how he needed to “get alone” with Him, by taking a walk. Several days had passed and John finally went on a walk alone. Coming to a vacant lot, he pointed his finger in the air and said “God, you need to fix me…” The next morning, John felt a change come over him, and he knew something had happened. Sometime later, John told his wife about his walk that one night. She mentioned that their neighbors had been inviting them to church which was in the middle of a revival. John was curious about the revival, which Sue said was when “you go to church everyday”. John encouraged Sue to invite them for dinner. During their dinner with the neighbors, they told of the revival and again encouraged the Bells to attend the services. The following Sunday, John and his family wen to to church. As they entered the church, right in the middle of the pews was one row with no one in it. The row had been reserved for John and his family, as the church had been praying for them from the very start of the revival, that they would come. John had never been so lovingly received. That night, John, Sue and their children gave their hearts to the Lord.  His life, as well as theirs, was never the same. One thing John mentioned that stuck out was this:

“Through Jesus Christ, we can dare to hope and dream again.”

Jesus not only gives us salvation, but breathes new life into our hearts, and reshapes those broken dreams and hopes, or gives us entirely new ones. We thank God for people like John, whose life is glowing testament of His regenerative power.

Well friends, that is all for now. But we will meet again next week, with more updates, news and messages.

Your Family at All Nations International.