Where has the time gone? It’s been a little over a month since the big move to Prescott Valley, AZ! Three semi’s and several loads later, we are working to settle in as quickly as possible. There’s a lot of ground to cover in telling how we arrived. 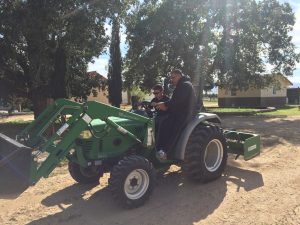 Moses and Daniel, taking a break from work. 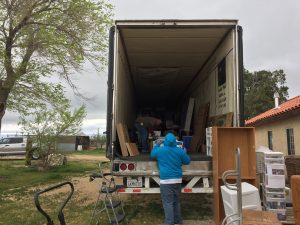 First off, we are grateful to each and every person who helped us sort, clean, pack, load and unload! We want to thank Moses and Veronica Sanchez for all of their help, and the team of men they brought with them. Moses’ and his mighty men had all of our things loaded in no time at all! Linda Vasquez was able to get a team of ladies’ and several volunteers to come and help and they did a wonderful job. Kathy Smith, Sylvia Dawn, Marva Beauvoir, Crystal Organ, Raven Holmes and so many others came together and were a blessing! 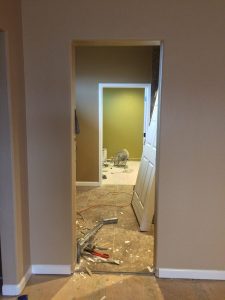 Once we arrived, the task of cleaning, unloading, and sorting began. Jordan and Michelle Skinner ripped out old carpeting, worked on laying down flooring in the bedrooms and more, while Moses and his team unloaded the semi’s and did other tasks in preparing the house. Too quickly, it was time to say goodbye to them as they left for home.

Our friends from China arrived not long after, and almost immediately, began helping organize boxes, unpacking them, cooking, cleaning, and helping set up the garden. The Lord blessed them mightily and in turn, they blessed us!

Kathy Smith came to bless us with help and her good cooking, and we were grateful! It was great to have fellowship with our precious sister. Pastor Sam from Morongo, together with Gordon, did some much needed electrical repairs. We’re thankful for these two and their heart of service!

Before our move, the Lord gave us many words of what the transition would bring for us, spiritually and naturally. We have seen these come to pass with swiftness! To paraphrase what Rev. Agnes would often say, God is going to do it and it will be apparent to everyone that it is He who is doing it!

One such example happened with Annella. She went to a lumberyard and asked to speak to a certain sales clerk she had called earlier. Somehow, the clerk was not there and before Annella realized what was happening, she was speaking to the manager. Feeling prompted to share what we do and why, the manager was moved, and gave a price break on the lumber! Later, Annella realized she had gone to the wrong store, or so she thought! But the Lord knew where He wanted her to go, and we are so glad she did.

Another example led us to a major breakthrough with the training center! Every month, a local chiropractor and his business comes alongside a different non-profit or ministry and assists them. Teresa felt the Lord move her, and she told him about what we do, our desire for a training center and our need for an Arizona contractor. The doctor wasted no time in writing down the name and number of a local contractor. He told Teresa that whenever we had special projects, he and his staff would like to be a part of the work! What a blessing!

A phone call and about a week later, the contractor came. So much unfolded from that visit, that we are still in awe of the Lord. In essence, the man is ready to help us with our training center, and also has a heart for missions. Being part Native, he is also interested in working on the Native Reservations with us. We were blown away from this man’s visit and were so encouraged to know that the Training Center would be more than just a blueprint on a page, but a reality! He so much reminds us of our precious John Bell. Coincidentally, his name is John also! We are rejoicing in God, and thankful for this precious God connection!

These are just some of the beautiful things that have happened in the short two months we’ve lived here. Not only are the doors opening to move forward on the training center, but the doors for working with people are opening as well!

One of our biggest desires in this transition is to have more opportunities to preach the Gospel, in creative ways. An area that we are excited about is the teaching of the Mobile Training Institute (MTI) Curriculum! Thanks to video calling, we are able to go through the curriculum with anyone in the world who has a computer, a webcam and internet. Below, Gordon is having a bible study class using Skype. Technology can be a blessing and an important tool in bringing His Kingdom here on earth!

Do you ever think of evangelizing to your UPS delivery person? Imagine if the simple act of greeting him or her could lead to God reaching out and touching their lives! That’s what happened to Teresa and Ashley one warm April afternoon. A UPS truck came to drop off a package. Teresa met the driver at the entrance of our garage. Now, moving in general usually takes a lot of boxes. Picture, if you can, a 10 car garage filled with boxes, chairs, metal cabinets, furniture and the like…one can only imagine the piqued curiosity our UPS driver had. So overwhelming was his interest that he questioned Teresa as to the state of our garage. Little did he know, his questions about our things would open the door for God to touch his life on that sunny afternoon. As Teresa explained our things and who we were, the UPS driver confided that he had been away from the Lord for some time, but in the last year, had begun to seek Him again. The Lord came upon Teresa and spoke words of encouragement through her. Teresa and Ashley prayed for the gentleman before he left. It was a precious time and reminded us that even in something as simple as saying hello, God can enter in. 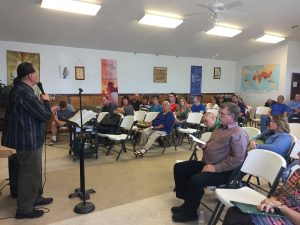 Remember when we said it took a week for the contractor to visit? During that week, Teresa and Gordon went to Nebraska to be with Gabriel and Laura Ward at their healing event, together with Bruce and Marsha Bonfluer of Lakota Hope. For those who know Teresa, the Pine Ridge Indian Reservation has been on her heart for many years.

If you haven’t seen the news, the town of Whiteclay, NE had their three liquor stores shut down. A staggering 10,000 to 12,000 cans of beer were sold in a single DAY! Whiteclay is a border town not far from Pine Ridge, and many Natives would go there and purchase their beer. Gabriel ministered powerfully, and gave a prophetic word to the Pine Ridge Indian Reservation:that God was going to do in Pine Ridge greater than what He did in White Clay, and the Lord was going to come through the marketplace, because He was interested in the economy of the Native people.

Now with the liquor stores having their licenses revoked, the doors are opening for Pine Ridge to have a mighty visitation from the Lord! Hallelujah!

At times, it feels like everything is happening so quickly. We are humbled and in awe at how He is moving in the hearts of people to come and work with us. And we are excited at what more we will update you on in the coming months.

We thank you for continuing on this journey with us, as the next chapter of All Nations unfolds. 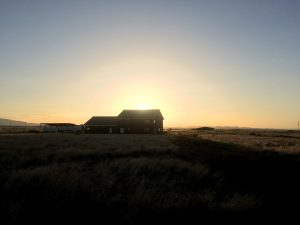 Love, your Family at All Nations International